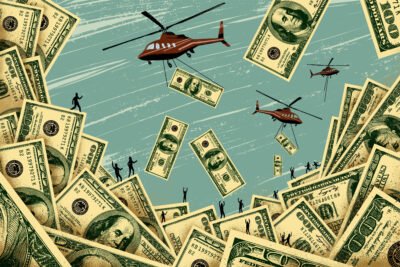 Prosecutors have charged two men with filing for loans via the program - which offers loans that convert to grants for each employee that a company retains until a certain cutoff point, at which time we suspect another round of mass-layoffs will begin - on behalf of employees that didn't actually exist at their company.

The two men, David A. Staveley, aka Kurt D. Sanborn, 52, of Andover, Massachusetts, and David Butziger, 51, of Warwick, Rhode Island,  are being charged with fraudulently seeking a forgivable loan from the SBA.

A week ago, Secretary Mnuchin promised that all public companies who had received small business loans would be asked to return the money, while the DoJ assigned a team of prosecutors to root out fraud amid the flood of millions of loan applications that was tantamont to giving out more than a decade's worth of loans in just a few weeks.

We imagine this may be the first of many. It's unclear how either man will plead, and as a reminder, all accused are - as far as the law is concerned - presumed to be innocent until proven guilty.

It's funny, when Mnuchin promised to punish anybody trying to defraud the small-business relief program, we thought he would be focusing on large corporations attempting to drain tens if not hundreds of millions of dollars from the pool, not two small business owners in Rhode Island.