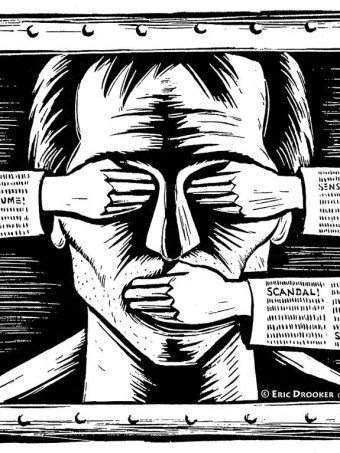 While on paper, we are technically free to speak—at least according to the U.S. Constitution—in reality, however, we are only as free to speak as the government and its corporate partners such as Facebook, Google or YouTube may allow.

That's not a whole lot of freedom. Especially if you're inclined to voice opinions that may be construed as conspiratorial or dangerous.

Icke, a popular commentator and author often labeled a conspiracy theorist by his detractors, recently had his Facebook page and YouTube channel (owned by Google) deleted for violating site policies by "spreading coronavirus disinformation."

The Centre for Countering Digital Hate, which has been vocal about calling for Icke's de-platforming, is also pushing for the removal of all other sites and individuals who promote Icke's content in an effort to supposedly "save lives."

Translation: the CCDH evidently believes the public is too dumb to think for itself and must be protected from dangerous ideas.

This is the goosestepping Nanny State trying to protect us from ourselves.

'The silent majority has made itself heard': Whistleblower sacked by Facebook...