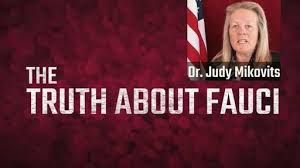 The upcoming movie (read about the man who created it here) raises questions about the government's approach to the COVID-19 pandemic and whether there is a financial incentive to provoke mass vaccinations, among other claims. Mikovits, who has a new book out, was featured in the first vignette released to promote the movie. Her controversial career in the scientific community has been punctuated by an arrest, lawsuit, retracted research study, allegations against Fauci and clashes with the founders of the Whittemore Peterson Institute for Neuro-Immune Disease, which is located in Reno, Nevada.

The promotional material for Plandemic claims:

While some have dubbed Mikovits a conspiracy theorist and anti-vaccine "truther" whose claims don't match the facts regarding her arrest and research, a press release for Mikovits's book describes her in a different light, casting her as a scientist "with the brilliant wit one might expect if Erin Brockovich had a doctorate in molecular biology."

A Group Of Parents Sent Their Kids' Face Masks to A Lab for Analysis. Here's What They Found