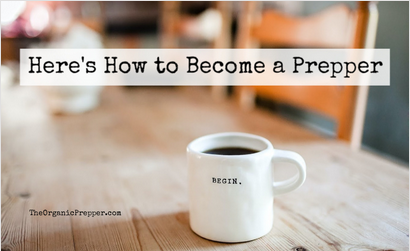 If the coronavirus has inspired you to become a prepper, you're not alone. At long last, prepping has become mainstream due to runs on supplies, shortages, and stay-at-home orders throughout the country. More folks than ever before are seeing the wisdom of having extra food and household goods on hand. It can help you through not only disasters and pandemics, but also through personal financial problems.

But delve into most preparedness websites (including this one) and it can start to get overwhelming when you read articles about civil unrest, EMPs, and existential catastrophes. You'll see articles about guns and outdoor survival and all sorts of things in which you have absolutely no interest.

And more than that, it's kind of overwhelming. It can make you feel like, "Wow, I will never be able to have a bunker in Montana with 150,000 rounds of ammo. I don't even know how to build a fire. Why even bother?"

Before we get started with the "how to's" here are a few things you should know.

All of us started at the beginning.

It's important to know that all of us started somewhere. We all had some event that awakened us to the need to be better prepared. (To learn how some readers were inspired to get started, go here.) We all had to learn the ins and outs, read the books, and acquire the stuff.

Most of us don't have thousands of dollars to drop on buckets of food and secondary locations. We began by just getting a few extra things when we could.

It takes some time.

Getting well-prepared doesn't happen overnight. Even if you have a budget that is relatively unlimited, you will find that it still takes time to figure out what you need, where to get it, and where to store it.

So if you can only afford a few extra things each week, that's a fantastic place to start. Within a month, you may have an extra week's food supply doing things that way. Within a year, you've got a 3-month supply.

Rome wasn't built in a day and neither was a prepper's stockpile.

You don't have to be of a particular political or religious belief to be a prepper.

A lot of folks think that most preppers are well-to-do white, right-wing Christians. While a lot of preppers do have that in common, there are a lot who do not. We don't all live on an acreage in the boondocks and raise everything we eat.

If you feel like you don't fit into the mold, don't worry because let me tell you a secret: there really is no mold. We have readers of this website from all different kinds of political and religious backgrounds. We have city dwellers and suburbanites. We have folks who live off the land and folks who buy most of their food from the grocery store. We have rich readers and poor readers. We have people coming here from many different countries with many different belief systems. The thing that unites us is that we want to be prepared.

We have people who are involved in prepping for a huge variety of reasons and we, the writers and editors of this site, sincerely welcome anyone who wants to become better prepared for emergencies.

You don't have to be a tinfoil hat conspiracy theorist to be a prepper.

A lot of folks have this mental image of some wild-eyed guy peering out of the bunker wearing a tinfoil helmet. I'll grant you that a lot of preppers are mistrustful of the things we hear in the mainstream media. We don't take things at face value.

I guess what I'm trying to say here is that we run the gamut. Don't let the stereotypes scare you away.

In most of the preparedness world, you'll be welcomed with open arms. But there are a few websites and forums where you find long-time preppers who are incredibly discouraging. If you run into this issue repeatedly, don't continue hanging out there. Getting started on a big endeavor is overwhelming enough without people like that making you feel like crap.

WE CAUGHT THEM! Forensic Evidence Will Prove 2020 Election Was 100% Rigged #KrakenOnSteroids