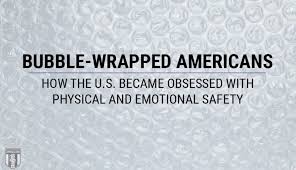 "In America we say if anyone gets hurt, we will ban it for everyone everywhere for all time. And before we know it, everything is banned."

It's a common refrain: We have bubble-wrapped the world. Americans in particular are obsessed with "safety." The simplest way to get any law passed in America, be it a zoning law or a sweeping reform of the intelligence community, is to invoke a simple sentence: "A kid might get hurt."

Almost no one is opposed to reasonable efforts at making the world a safer place. But the operating word here is "reasonable." Banning lawn darts, for example, rather than just telling people that they can be dangerous when used by unsupervised children, is a perfect example of a craving for safety gone too far.

Beyond the realm of legislation, this has begun to infect our very culture. Think of things like "trigger warnings" and "safe spaces." These are part of broader cultural trends in search of a kind of "emotional safety" – a purported right to never be disturbed or offended by anything. This is by no means confined to the sphere of academia, but is also in our popular culture, both in "extremely online" and more mainstream variants.

Why are Americans so obsessed with safety? What is the endgame of those who would bubble wrap the world, both physically and emotionally? Perhaps most importantly, what can we do to turn back the tide and reclaim our culture of self-reliance, mental toughness, and giving one another the benefit of the doubt so that we don't "bankrupt ourselves in the vain search for absolute security," as President Dwight D. Eisenhower warned us about?

Coddling and Splintering: The Transformation of the American Mind

Two books published in 2018 provide parallel insights into the problems presented by the safety obsession of American culture: The Splintering of the American Mind by William Egginton, focused on the tendency of Americans to tunnel themselves off into self-selected bubbles, and The Coddling of the American Mind by Greg Lukianoff and Jonathan Haidt, which deals more with the tendency to avoid any uncomfortable or unpleasant information.

There is an interesting phenomenon involved in coddling: Australian psychologist Nick Haskam first coined the term "concept creep." Basically, this means that terms are often elastic and expand past the point of meaning. Take, for example, the concept of "trauma." This used to have a very limited meaning. However, "trauma" quickly became expanded to mean even slight physical or emotional harm or discomfort. Thus the increasing belief among the far left that words can be "violence" – not "violent," mind you, but actual, literal violence.

In the other direction, the definition of "hero" has been expanded to mean just about anything. Every teacher, firefighter and police officer is now considered a "hero." This isn't to downplay or minimize the importance of these roles in our society. It's simply to point out that "hero" just doesn't mean what it used to 100 or even 30 years ago.

Once this expansion of a term occurs, there is never any kind of retraction. Trauma now means just about anything, and violence will soon be expanded to include lawful, peaceful speech that one disapproves of. Once this happens, there will be no going back. In the words of Sam Harris:

"We (as a society) have to be committed to defending free speech however impolitic, or unpopular, or even wrong because defending that is the only barrier to violence. That's because the only way we can influence one another short of physical violence is through speech, through communicating ideas. The moment you say certain ideas can't be communicated you create a circumstance where people have no alternative but to go hands on you."