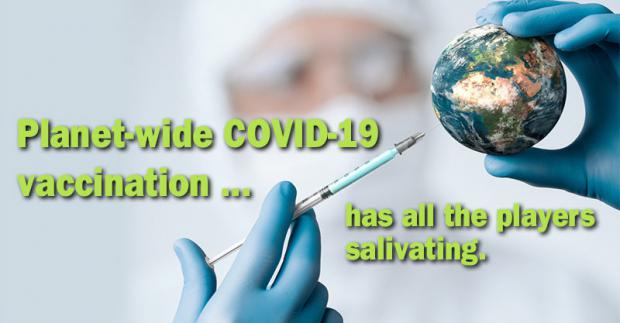 By the Children's Health Defense Team

[Note: This article represents Part I of a two-part series examining COVID-19 vaccine technologies and their implications.]

For weeks, talking heads have been promoting the liability-free vaccine(s) that will save the world—so Bill Gates and Tony Fauci proclaim—from what Gates has now dubbed "Pandemic I." As Microsoft News peddles self-congratulatory stories about the Gates Foundation's reorientation of its priorities to devote "'total attention' to the pandemic," Fauci—making the rounds of talk shows—pledges that a vaccine will make its debut in January 2021. Not to be outdone, the White House has now unveiled "Operation Warp Speed"—a joint pharmaceutical-government-military effort aimed at "substantially shrinking the development time for a vaccine"—and President Trump promises one by the end of the year.

Planet-wide COVID-19 vaccination—the overt objective that has all of these players salivating in anticipation—ignores a number of irrefutable obstacles. For one, the RNA virus being targeted, SARS-CoV-2, already "has mutated into at least 30 different genetic variants." The variants include 19 never seen before as well as "rare changes that scientists had never imagined could happen." Knowledge about these mutations may prove useful to clinicians wanting to better tailor their COVID-19 treatments, but the proliferation of mutations makes the chances of developing an effective vaccine immensely more uncertain.

Not to worry, say the entities funded by Gates (and also the Pentagon). Scientists working in the burgeoning field of synthetic biology are confident that they can "outdo" and outsmart nature using next-generation vaccine technologies such as gene transfer and self-assembling nanoparticles—along with invasive new vaccine delivery and record-keeping mechanisms such as smartphone-readable quantum dot tattoos. Does it matter that the researchers who have been experimenting with these approaches have never been able to overcome "nasty side effects"? Apparently not. Aided and abetted by the generous Gates and military funding, high-fanfare COVID-19 vaccine planning is proceeding apace.

Researchers reiterated this point …  that for most emerging virus vaccines, the main obstacle is not the effectiveness of conventional approaches but the need for more rapid development and large-scale deployment.

From a manufacturing standpoint, vaccine makers—and particularly those making viral vaccines—have long chafed at the limitations of traditional vaccine technologies, which rely on processes that necessarily entail "a considerable lag time between antigen production and vaccine delivery." Researchers reiterated this point again in 2018, writing in Nature Reviews Drug Discovery that "for most emerging virus vaccines, the main obstacle is not the effectiveness of conventional approaches but the need for more rapid development and large-scale deployment."

In the 1980s, manufacturers were elated when scientists developed new genetic engineering techniques (recombinant DNA technology) that—through the use of "expression systems" (bacteria, yeast, insect cells, mammalian cells or plants such as tobacco)—made it possible to jumpstart vaccine production and produce so-called "subunit vaccines." The hepatitis B vaccine was the first to employ this "entirely new" vaccine production approach, and a number of the COVID-19 vaccines currently in the works are deploying these techniques. However, a complicating factor of subunit vaccines is that they must be bundled with "immunopotentiating" adjuvants that tend to trigger an imbalanced immune response.