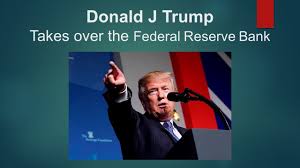 Since the 1760s and the rise of the Rothschild banking empire, the world has been held hostage by the global banking elite families, led by the Rothschilds - creating the largest organised crime syndicate on Earth - larger than all other crime syndicates combined - more brutal, more bloodthirsty and yet completely visible to all. They have abducted, tortured, bribed, extorted and murdered all their opponents to stay in control. They launched most of the wars in history, invaded countries and removed any threat with brutal force over and over again. They have more blood on their hands than all other crime syndicates combined. Many honest leaders, presidents and prime ministers have tried to free their countries from the banksters' stranglehold over this period, but so far, in over 250 years, no one has succeeded.

President Donald J Trump has quietly taken over the Federal Reserve Bank of the USA, in the last 2 weeks of March 2020 - without any fanfare or massive media exposure. In a cunning move, Trump is now in complete control of the largest Reserve Bank on Earth - without any violence or bloodshed - by simply absorbing the FED into the Treasury Department.

It may take some time for this to sink in - But this is a pivotal moment in more that 250 years - will other leaders follow the USA president, or are they too fearful? At least the USA will not invade your country, as they have done before - to topple the "rogue" leadership in order to retain control of the central bank - because the USA is leading this historic break-away moment.