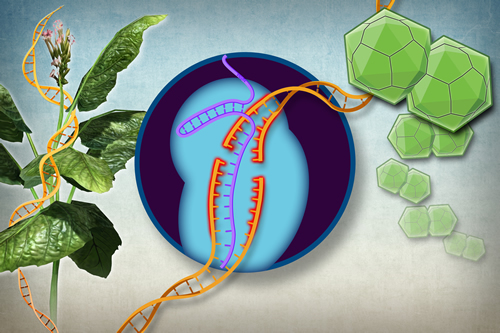 CRISPR-Cas9 allows for precise cut-n-paste edits to DNA in living cells. An RNA guide sequence directs the system to the target section of the genome. Once there, an enzyme, usually Cas9, snips out the sequence then deletes it or replaces it with something else. In this way, scientists can cut out problem genes, such as those that cause disease, or add new beneficial ones, such as giving crops better pest resistance.

For the new study, the researchers tweaked the process to make a "cleaner" edit in plants. It uses a process known as lipofection, where positively-charged lipids are used to build a kind of bubble around the Cas9 and RNA mechanisms. When injected into the organism, this bubble binds to and fuses with the cellular membrane, which pushes the CRISPR system into the cell itself. The method also uses a Cas9 protein itself, rather than the Cas9 DNA sequence.

The team tested the method by introducing fluorescent proteins into tobacco plants. And sure enough, after 48 hours the edited plants were glowing, indicating it had worked.