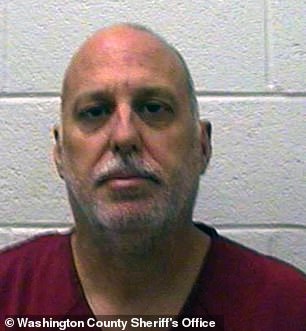 A former volunteer police chaplain from Tennessee was sentenced to probation and no prison time after he admitted to repeatedly committing incest  on a teenage girl.

In addition to the four counts of incest, Anthony Padgett, 52, also pleaded guilty on Wednesday to solicitation of a minor and violation of an order of protection/restraining order.

As part of the plea agreement with the prosecution, other counts were dropped, including solicitation of first-degree murder stemming from an alleged plot to hire a man to kill Padgett's victim, reported WCYB.

According to the Washington County Criminal Court Clerk's Office, Padgett was sentenced to 12 years of probation.

Padgett, from Johnson City, was arrested in 2018 after a woman filed an order of protection against him, claiming that she was raped by the former police chaplain more than 100 times over a two-year period, beginning when she was just 15 years old.