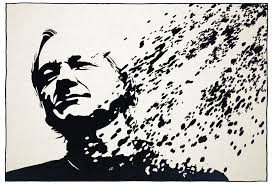 I do not respect anyone who has not been to prison." Julian Assange once said to Renata Avila, a Guatemalan human rights activist who serves as legal counsel for WikiLeaks. "What he meant," Avila says, "was that being in prison means that you have made so much trouble for the system that the only way for the system to deal with you is to lock you up and try to silence you."

After a decade of being shuttled from house arrest to confinement in an embassy to Belmarsh Prison to, if the United States government gets its way, ADX Florence in Colorado, there is no question that the Executives of Empire are trying to silence Assange.

Assange and Avila are not the first to make such an observation, for in his classic essay "Civil Disobedience," the nineteenth-century American writer Henry David Thoreau said, "Under a government which imprisons unjustly, the true place for a just man is also a prison… where the State places those who are not with her, but against her."

With the remaining three weeks of Assange's extradition trial scheduled to begin Monday, May 18, Thoreau's philosophy of civil disobedience offers lessons about the history of the U.S. government's retaliation against those who refuse to submit. These lessons appear most clearly in Thoreau's commentary on the execution of John Brown.

The execution of John Brown

Brown was a militant abolitionist from Connecticut who made his reputation by using violence against slavers during the antebellum period. While living in Kansas, he once led a group of antislavery guerrillas who attacked a group of slavery sympathizers who participated in an anti-Black race riot, dragging five men from their cabins and hacking them to death with hatchets. Most famously, however, Brown led a raid on a U.S. military armory at Harpers Ferry, hoping to steal weapons and incite a slave rebellion. The raid failed. Brown was found guilty of treason and hanged.