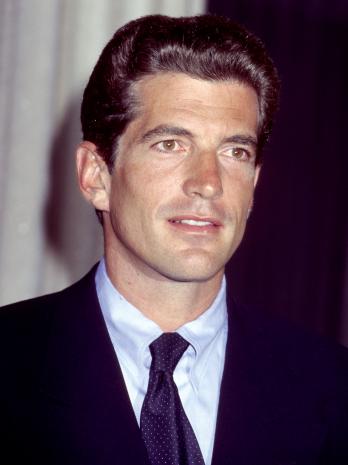 Consider, if you will, a sliding scale of celebrities. On one end of this spectrum are those who are still alive, including but not limited to: Jennifer Aniston, Justin Bieber, nine-tenths of the original cast of Beverly Hills, 90210. On the other end are those who are dead, also including but not limited to: Elvis Presley, John Belushi, and (arguably) Tupac.

On this scientific scale, John F. Kennedy Jr. falls somewhere in between Judy Garland and former Minnesota Twins center fielder Kirby Puckett; all of which is to say, he is extremely, irrefutably dead. In July 1999, the pulchritudinous son of John and Jackie Kennedy and cofounder of George magazine perished in a tragic plane crash at the age of 38, along with his wife Carolyn Bessette and his sister-in-law Lauren. At least, this is the conventional narrative perpetuated by the fake news media, according to supporters of the pro-Trump conspiracy theory QAnon. Hardcore Q believers think that JFK Jr. is not only alive and well, but also that he plans to emerge from his 20-year hiatus from public life by coming out and supporting Trump as his running mate in 2020. Moreover, they believe that a guy in Pittsburgh named Vincent Fusca is actually JFK Jr. in disguise, and they have made T-shirts promoting this belief. (Seriously. You can buy them on Amazon.)

The theory that JFK Jr. is alive and a Trump supporter and a hirsute former financial services professional who lives in Pittsburgh has been percolating in QAnon forums for at least the past year. But it recently made a resurgence on YouTube, where QAnon supporters are posting tutorials for how to make JFK Jr. face masks to wear to Trump's much-hyped July 4th rally, when they believe JFK Jr. will finally emerge from hiding. The goal of the masks, according to Daily Beast reporter Will Sommer, is for believers to be able to easily identify other QAnon supporters (though, frankly, this seems unlikely, as the shock of seeing a long-dead celebrity casually walking around Washington would almost certainly inspire mass fear and panic in the streets).