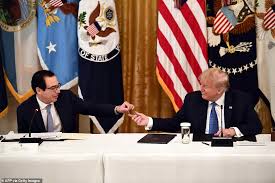 The president was backed by Health and Human Services Secretary Alex Azar and Veteran Affairs Secretary Robert Wilkie during the meeting.

But not one member of the cabinet said they were taking the controversial drug when probed. Trump said: 'Many of them would take it if they thought it was necessary.'

Trump was also shown debit cards embossed with his name which will be used for stimulus payments.

First Daughter Ivanka, her husband Jared and counselor to the president Hope Hicks watched on as he was handed one by Treasury Secretary Steve Mnuchin.

The stimulus debit cards will be sent out to Americans this month.

Mnuchin said: 'We now have developed debit cards. In an effort to expedite money to people even quicker in a very safe way, I'm pleased to show you what a debit card looks like with your name on it, Mr. President.

'We think debit cards are a safe and secure way of delivering refunds.'