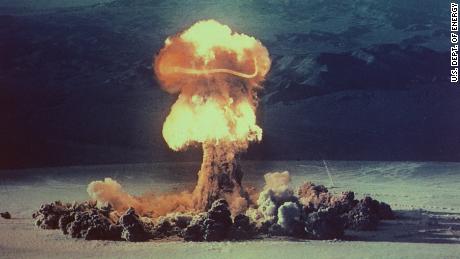 The Trump administration has discussed whether to conduct the first U.S. nuclear test explosion since 1992 in a move that would have far-reaching consequences for relations with other nuclear powers and reverse a decades-long moratorium on such actions, said a senior administration official and two former officials familiar with the deliberations.

The matter came up at a meeting of senior officials representing the top national security agencies last Friday, following accusations from administration officials that Russia and China are conducting low-yield nuclear tests - an assertion that has not been substantiated by publicly available evidence and that both countries have denied.

A senior administration official, who like others spoke on the condition of anonymity to describe the sensitive nuclear discussions, said that demonstrating to Moscow and Beijing that the United States could "rapid test" could prove useful from a negotiating standpoint as Washington seeks a trilateral deal to regulate the arsenals of the biggest nuclear powers.

The meeting did not conclude with any agreement to conduct a test, but a senior administration official said the proposal is "very much an ongoing conversation." Another person familiar with the meeting, however, said a decision was ultimately made to take other measures in response to threats posed by Russia and China and avoid a resumption of testing.