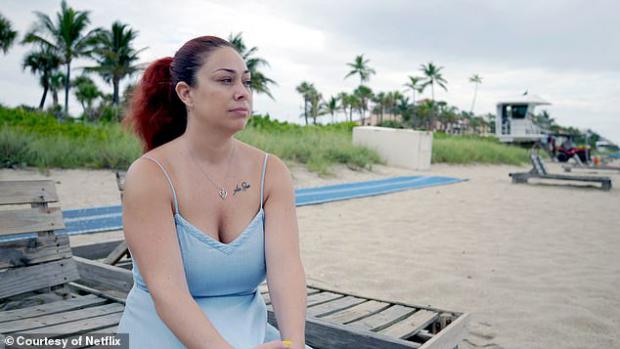 A woman has admitted procuring two dozen schoolgirl friends – some as young as 14 – for paedophile billionaire Jeffrey Epstein and being paid $200 for each victim.

In a harrowing interview for a new Netflix documentary series, Jeffrey Epstein: Filthy Rich, which premieres on Wednesday, tearful Hayley Robson is the first of Epstein's so-called 'recruiters' to admit introducing children into his 'twisted sexual pyramid scheme' for money.

Ms Robson, who was 16 when she began working for Epstein, says she was racked with guilt for years, until she realised that she was also a victim.

She was introduced to Epstein in 2003 by a friend at Royal Palm Beach High School in Florida who said she could make money giving 'an old guy' massages.

But when she went to Epstein's £25million mansion in Palm Beach, he tried to molest her in one of the bedrooms.

Ms Robson, 33, says: 'He was naked on the table. I remember feeling really scared. He tried to touch me below the belt. I declined. I told him I didn't feel comfortable, and no, it's not going to happen.

'At that moment he was like, "Okay, well this isn't going to happen so if you have any friends and you bring them to me, I will give you $200.''

'I would recruit girls who were friends. I would casually bring it up and we would drive together to his house. I would take them to his room and then I'd walk out. Sometimes I would wait by the pool.