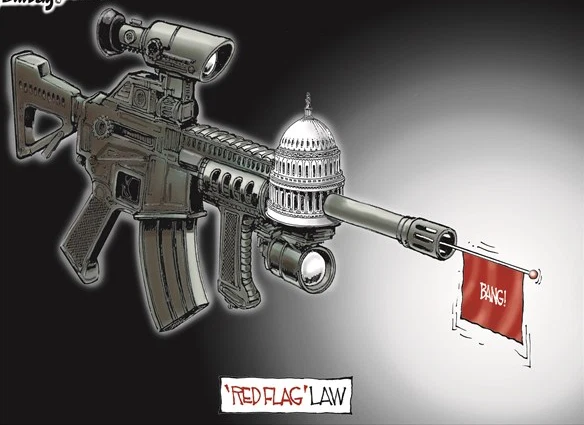 Authored by Sen. Nathan Dahm, R-Tulsa, and Rep. Jay Steagall, R-Yukon, the bill was signed into law by Gov. Kevin Stitt on Saturday. It prevents Oklahoma cities and towns from enacting policies that would allow a court or other entity to restrict gun access to people they deem to be an imminent danger. The bill passed the House 77-14 and the Senate 34-9. "This bill would stop any action from the federal government or even from local or state authorities that would infringe on the Second Amendment rights of our citizens," Steagall said. The bill is said to be the first of its type in the nation. Critics of the bill said it was unnecessary because Oklahoma municipalities are already prevented from engaging in gun control.

First, gun control is a fundamental plank in the Democrat platform. Their platform states: "We recognize that the individual right to bear arms is an important part of the American tradition, and we will preserve Americans' Second Amendment right to own and use firearms. We believe that the right to own firearms is subject to reasonable regulation." Their "reasonable regulation" includes banning of assault rifles and more background checks. So much for not infringing. The Republican Party platform states: "We believe the Second Amendment and all the rights guaranteed by it should enable law-abiding citizens throughout the country to own firearms in their homes for self-defense." Perhaps there is not an issue where the two major parties differ than on the Second Amendment. Joe Biden, the presumptive Democrat nominee, says he would push to have gun manufacturers held accountable when one of their guns is used in a mass shooting. No word on whether he would hold knife manufacturers to the same standard.

Clearly, the Second Amendment is under attack across the country. It is sad to say, but in conservative Oklahoma, there are mayors and city councils who would attempt to implement gun control if they could. We have seen several examples of "heavy-handed" mayors overstepping their bounds by restricting liberty of their citizens above and beyond the recommended guidelines of the CDC during the COVID-19 pandemic.

The One Thing Everyone Should Do Right Now