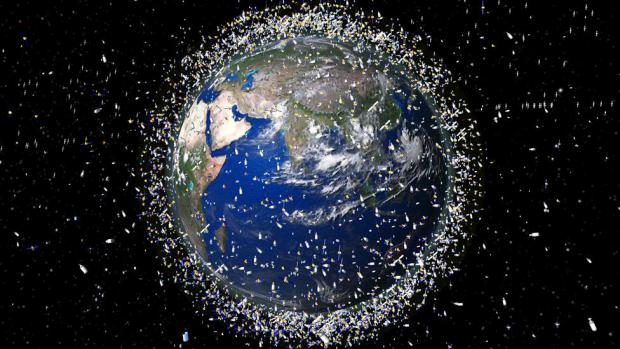 The buildup of space debris is a serious problem that won't be going away anytime soon, with thousands of pieces of junk currently in orbit around the Earth. A team of researchers has put forward a novel way to keep things in check, making a case for charging satellite operators an "orbital-use fee" that would not only help reduce the risk of collisions, but possibly boost the overall value of the satellite industry.

The accumulation of busted-up spacecraft, rockets and satellites in orbit over the years has created a significant risk for those still in operation. These pieces of space trash whiz around the Earth at up 17,500 mph (28,100 km/h), posing a very real threat to satellites and spacecraft currently in low-Earth orbit. In fact, the crew aboard the International Space Station has been forced to take shelter numerous times over the years, when orbital space debris has come a little too close for comfort.

Scientists and engineers have proposed all kinds of solutions when it comes to cleaning up this giant mess. These include satellites equipped with harpoons to skewer debris, introducing space sustainability ratings that reward responsible behavior, a Space Fence to detect and track junk and nets that scoop it up for safe disposal.

But with projects such as SpaceX's Starlink mega-constellation of satellites in the works, this region of space is only going to get more crowded, and clearly some big picture solutions are needed. The way the authors of this new study see it, creating the right incentives for operators, rather than trying to tackle the problem through engineering and intervention after the fact, would go a long way to ensuring more responsible use of space.

"This is an incentive problem more than an engineering problem," says lead author Akhil Rao, assistant professor of economics at Middlebury College. "What's key is getting the incentives right."

Rao and his colleagues from the University of Colorado Boulder developed a model that considers the expected lifetime value of a new satellite and the cost to industry via the extra risk of collisions it creates. As it stands, operators tend to continue launching satellites until their private collision risk equals the value of the satellite, but the team's model explored how an orbital-use fee could create an incentive to ensure the spacecraft are properly managed and disposed of at the end of their lifetimes.