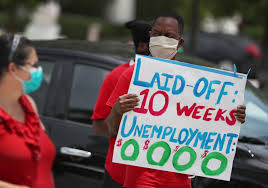 Continuing claims plunged by nearly 4 million to just over 21 million, probably a clearer representation of the jobless level.

The high jobless numbers persist even as all states have reopened their economies to various extents.

Nearly 41 million jobless claims have now been filed since the coronavirus was declared a pandemic.

First-time claims for unemployment benefits totaled 2.1 million last week, the lowest total since the coronavirus crisis began though indicative that a historically high number of Americans remain separated from their jobs.

Economists surveyed by Dow Jones had been looking for 2.05 million. The total represented a decrease of 323,000 from the previous week's upwardly revised 2.438 million.

Continuing claims, or those who have been collecting for at least two weeks, numbered 21.05 million, a clearer picture of how many workers are still sidelined. That number dropped sharply, falling 3.86 million from the previous week.