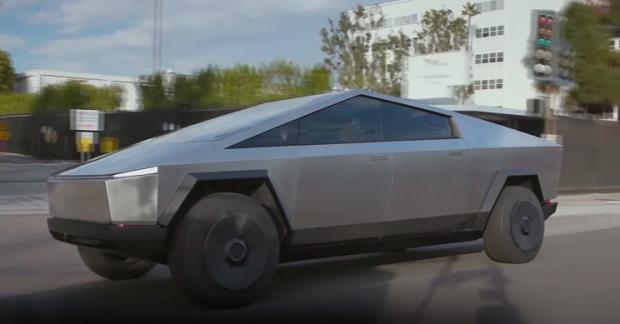 If Tesla CEO Elon Musk had to choose any celebrity to be the only other person to drive the Cybertruck publicly, Jay Leno is an obvious choice. Leno is a car collector and aficionado, he owns a Tesla Model S, and he's supported Tesla for years.

Last night – May 27, 2020 – Jay Leno's Garage aired the newest episode featuring the Tesla Cybertruck, along with Musk, of course. Chief designer Franz von Holzhausen made a brief appearance (he actually arrived in the Cybertruck). Musk, however, drove up in the Tesla Semi. In addition, Tesla's entire S3XY lineup is featured, as well as the upcoming Roadster.

For Tesla fans, you couldn't really ask for more eye candy here. However, the most fascinating part is seeing the Cybertruck up close, in broad daylight. Not to mention being inside the truck, with its plethora of glass and open, airy feel.

Some thought perhaps Musk would be doing most of the driving, but Leno is behind the wheel the entire time. That's a whole lot of trust since there's only one Cybertuck prototype that we're aware of. Leno even drives the truck into The Boring Company tunnel. As you can see, it just barely fits in terms of its width.

At any rate, enjoy the video and let us know what you think by leaving a comment below.