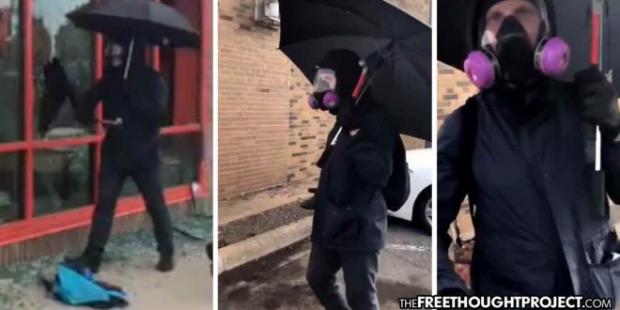 Dozens of businesses and other buildings in Minneapolis, near the police department's third precinct, were hit hard with vandalism this week, with some of them being completely burned to the ground. There was undoubtedly some organic intent behind this destruction. However, several videos of a highly suspicious man wearing a gas mask and carrying a hammer, paint an ominous picture of potential agent provocateurs stoking the rioting among the protesters.

Throughout the day, most of the protests in Minneapolis were peaceful with the exception of protesters directing their anger and property destruction toward the police department who refused to immediately charge George Floyd's killers. However, as was widely reported, the Autozone near the department was one of the first places to be looted and set on fire.

Now, we have the video of the first person to instigate the destruction — and he was definitely not part of the George Floyd protests.

Brad Svenson (@SvensonBrad on pscp.tv) was streaming live Wednesday night. As he filmed the protests, he took no interest in the Autozone directly behind him as all the protesters were peacefully chanting at the officers in front of them.

All of that quickly changed, however, when we hear a loud pop, followed by the sound of breaking glass. When Svenson panned his camera around, we see a shady white guy, dressed in all black, holding an umbrella, a hammer, and a gas mask, shattering the windows out of the Autozone like he was getting paid to do it.

The Criminalization of Dissent