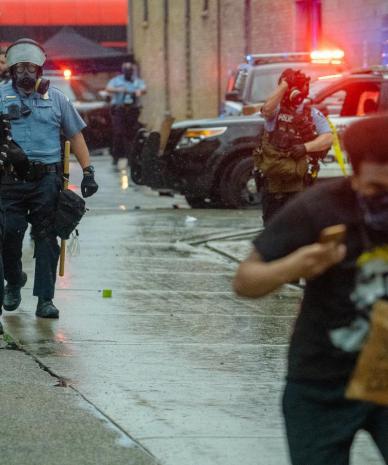 The murder of George Floyd at the hands of the Minneapolis police has sparked several days of protests, including the burning of a police precinct on Thursday night.

In solidarity with protestors, union bus drivers in Minneapolis signed a petition and refused to transport police officers and arrested protestors to jail on Thursday, PayDay Report first reported and independently confirmed by Motherboard. At one bus garage in downtown Minneapolis on Thursday evening, some workers refused to drive buses that were being dispatched to transport police officers.

"We are willing to do what we can to ensure our labor is not used to help the Minneapolis Police Department shut down calls for justice," the petition reads. "For example, I am a bus driver with ATU 1005, and I urged people to call MetroTransit and the Governor the second I heard our buses and members were being organized to make mass arrests hours before the protests escalated."

More than 400 union workers, including Minneapolis postal workers, nurses, teachers, and hotel workers have signed the petition posted on the Facebook group Union Members for #JusticeForGeorgeFloyd pledging not to aid the policing of the protests with their labor, according to Adam Birch, a Minneapolis bus driver who wrote the petition.

On Thursday, the city of Minneapolis shut down its light rail and bus services out of concern for employee and rider safety.

The Old America Is Dead. Where Do We Go from Here?