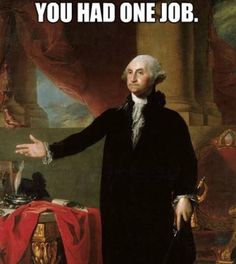 The Founding Fathers were wary of institutional threats to liberty and the citizenry's sovereignty, which included centralized concentrations of power (monarchy, central banks, federal agencies, etc.) and the tyranny of corruption unleashed by small-minded, self-interested, greedy grifters who saw all elected offices and positions of government influence as nothing more than a means to increase their own private wealth.

The Founders feared the dominance of self-interested, greedy grifters because they had no concept of the public good: to the greedy grifters, the government existed solely to serve their petty private interests and the interests of their fellow grifters.

The Founders understood that a republic required disinterested leadership capable of looking past petty self-interest to the common good of the people and their nation. They feared the election of self-interested, greedy grifters because once no one served the common good, the republic would fall into a fatal disunity.

We are living the Founders' nightmare, for America is corrupt to the core. While everyone gorging at the public trough bleats about the "common good," their single-minded focus is on aggrandizing as much power and private wealth as possible, and feeding their corrupt crew of insiders, lobbyists, "business interests," bankers and assorted other legalized looters.

America has plenty of law enforcement, prosecutors and prison cells for those who loot a Whole Foods, but none for those who loot the public treasury, commit stock market swindles or financial fraud on a monumental scale. Not only did no one go to prison for the rampant institutionalized fraud of the 2008 looting, a.k.a. the Global Financial Meltdown--the looters were bailed out by the Federal Reserve and Treasury.

More recently, no one was even questioned when a biotech company issued a press release about a Covid-19 vaccine trial that boosted the stock's price just long enough for insiders to dump millions of dollars of shares on a credulous public and also sell new shares in the company at a premium: a classic looting strategy known as pump and dump.

What Americans Fear Most In The JFK Assassination, Part 2

Snowden: Tech Workers Are Complicit in How Their Companies Hurt Society