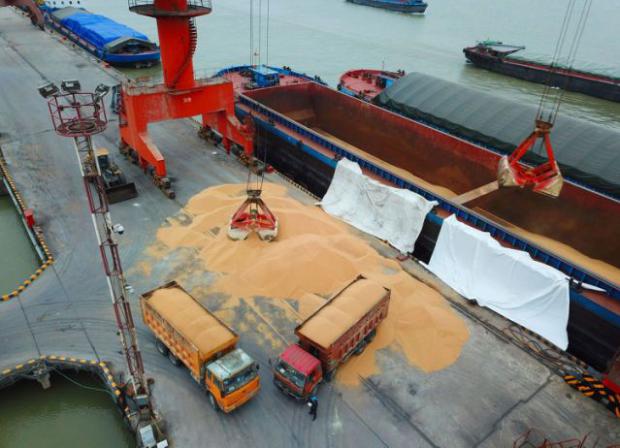 The halt is the latest sign that the hard won phase-one trade deal between the world's two biggest economies is in jeopardy. While Chinese Premier Li Keqiang last month reiterated a pledge to implement the agreement that was inked in January, tensions have continued to escalate since then amid a standoff over Beijing's move to tighten its grip on Hong Kong.

Beijing's move eroded the risk-on sentiment that had been prevailing over markets. The S&P 500 Index was little changed, while soybean futures in Chicago gained 0.4% after falling as much as 0.8% earlier. Shares of Archer-Daniels-Midland Co. were down 1.7% at $38.64.

"The market has already seen the deteriorating relationship between the China and the U.S. and many think that with the slow progress of Chinese commodity buying so far, the trade deal's future was already in jeopardy," said Michael McDougall, a managing director at Paragon Global Markets in New York.

The measures to halt imports come after President Donald Trump on Friday lobbed a barrage of criticism at Beijing after it moved to impose controversial new national security legislation on Hong Kong. Critics say it will crack down on dissent and undermine the "one country, two systems" principle that has kept Hong Kong autonomous of the mainland since the 1997 handover from the British.