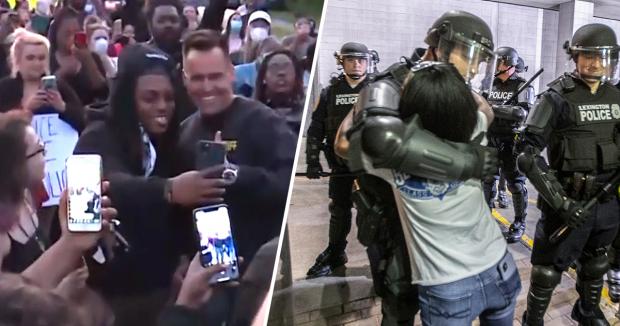 Sheriff Christopher R. Swanson of Genesee County in Michigan stood before a crowd of protesters on Saturday. They were outraged over the death last week of George Floyd in Minneapolis, police brutality and systemic racism.

"We want to be with you all for real," Sheriff Swanson said, addressing the demonstrators who had gathered in Flint, Mich., according to footage from WEYI-TV.

He said he made it a point to take off his helmet and that officers had put down their batons. "I want to make this a parade, not a protest," he said.

As the demonstrators applauded, he shook a protester's hand and high-fived another. He then acknowledged the children in the crowd. Gesturing to the officers behind him, he asked the crowd what he and the other officers needed to do.

And so he did.

Several hundred protesters marched from a Target store to the Flint Township Police station and remained peaceful during the protest, which lasted for several hours, the police said in a statement on Sunday.

"We are walking with you because all you're asking for is a voice and dignity for all, no matter who you are," Sheriff Swanson said in a speech after the march. "I love you guys. The police love you."