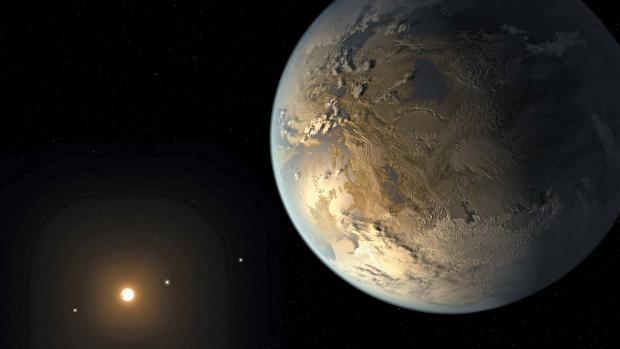 Proxima b was first detected four years ago by means of an older spectrograph, HARPS – also developed by the Geneva-based team – which measured a low disturbance in the star's speed, suggesting the presence of a companion.

Above – This artist's impression shows a view of the surface of the planet Proxima b orbiting the red dwarf star Proxima Centauri, the closest star to the Solar System. © ESO/M. Kornmesser

The ESPRESSO spectrograph has performed radial velocity measurements on the star Proxima Centauri, which is only 4.2 light-years from the Sun, with an accuracy of 30 centimetres a second (cm/s) or about three times more precise than that obtained with HARPS, the same type of instrument but from the previous generation.

ESPRESSO has made it possible to measure the mass of the planet with a precision of over one-tenth of the mass of Earth.

Proxima b is about 20 times closer to its star than the Earth is to the Sun, it receives comparable energy, so that its surface temperature could mean that water (if there is any) is in liquid form in places and might, therefore, harbor life.

Having said that, although Proxima b is an ideal candidate for biomarker research, there is still a long way to go before we can suggest that life has been able to develop on its surface. In fact, the Proxima star is an active red dwarf that bombards its planet with X rays, receiving about 400 times more than the Earth.

A trio of Mars missions in the starting blocks