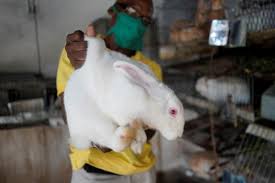 He's not alone. More Cubans are turning to bartering to meet their shopping needs, be it in person or on social media groups, as the novel coronavirus crisis worsens existing shortages of basic goods in the Communist-run island.

"Since they closed all the restaurants ... I now raise them to eat and to exchange," Aguilar said, in front of row after row of caged white rabbits.

"I exchanged rabbit for detergent or example, because I don't like these queues," he said, adding, "So far, I haven't done even one (queue)."

Shoppers had already faced long lines for some staple goods over the last year-and-a-half as Cuba's economic situation worsened with the implosion of ally Venezuela and amid tougher U.S. sanctions under President Donald Trump.

Now, the pandemic has halted tourism, slowed remittances and raised shipping costs, plunging Cuba into its worst economic crisis since the fall of its former benefactor, the Soviet Union, in the 1990s.

Cubans are not new to bartering. During the patronage of the Soviet Union, Cubans would swap local rum for Soviet tinned products from merchant sailors. And during the 1990s depression, farmers exchanged fruit and vegetables for city dwellers' manufactured goods.