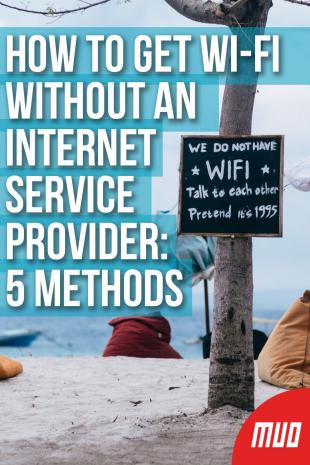 The best way to make sure you have the internet on your laptop at all times is to use a mobile hotspot.

Of course, there is an upfront cost of doing so—you will need to buy a hotspot device and subscribe to a mobile internet plan. Quite a few companies offer mobile hotspots.

There are three mobile hotspot models we particularly recommend:

Despite being a couple of years old, the Verizon Jetpack MiFi 8800L is probably still the best 4G hotspot available right now. It uses Qualcomm's X20 modem and supports 11 LTE bands. It provides both 2.4 and 5GHz mobile networks, supports guest connections, and allows you to connect up to 15 devices to the network at once.

The device is only available through Verizon. You can get the device for $99 if you sign up for a two-year mobile internet contract. It is $199 if you buy the device contract-free.

The HTC 5G Hub is the best 5G mobile hotspot on the market.

The device has a Qualcomm Snapdragon 855 CPU, a Snapdragon X50 5G modem, 4GB of RAM, support for Bluetooth and Ethernet connections, all-day battery life, and the ability to connect up to 20 devices at the same time. It runs Android.

On the downside, 5G is still not available everywhere. If you're looking for a hotspot that will work when you're off the beaten path, the HTC 5G Hub might not be for you.

The MiFi 8000 (only available on Sprint in the US), can provide internet speeds of up to 1Gbps while you're on-the-go.

The device will run for 24 hours on a single charge, supports guest connections, and offers an onboard VPN for added security.

Under the hood, you'll find 4GB of RAM and the in-house MiFi OS2 operating system.

If you need a laptop internet while you're traveling outside of the United States, you need a mobile hotspot and internet plan that both work internationally.

Of course, at those prices, it is not a suitable domestic option. But if you're on vacation and need to stay connected to home, it remains cheaper than using roaming internet on your smartphone.

2. Tether Your Smartphone or Tablet If you don't need regular mobile data and instead just need occasional access to the internet on your laptop, the fastest and easiest way to get online is often to tether your smartphone.

Tethering your smartphone or tablet does have two drawbacks.

You're entirely dependent on the signal of your mobile phone carrier. That's fine if you're in a city, but less reliable if you're out in the country.

Laptops typically use much more data than smartphones, meaning you could be in for a nasty surprise when your next phone bill lands in your mailbox.

On both Android and iOS, you should set a new username and password to protect the security of your hotspot.

Mandatory Mail-In Voting Shot Down by the Supreme Court

Google collects a frightening amount of data about you. How to find and delete it now