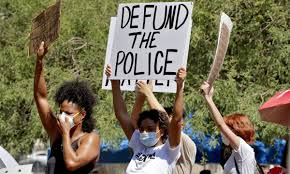 The movement to defund the police is gaining significant support across America, including from elected leaders, as protests over the killing of George Floyd sweep the nation.

For years, activists have pushed US cities and states to cut law enforcement budgets amid a dramatic rise in spending on police and prisons while funding for vital social services has shrunk or disappeared altogether.

Government officials have long dismissed the idea as a leftist fantasy, but the recent unrest and massive budget shortfalls from the Covid-19 crisis appear to have inspired more mainstream recognition of the central arguments behind defunding.

"To see legislators who aren't even necessarily on the left supporting at least a significant decrease in New York police department [NYPD] funding is really very encouraging," Julia Salazar, a New York state senator and Democratic socialist, told the Guardian on Tuesday. "It feels a little bit surreal."

Floyd's death on camera in Minneapolis, advocates say, was a powerful demonstration that police reform efforts of the last half-decade have failed to stop racist policing and killings. Meanwhile, the striking visuals of enormous, militarized and at times violent police forces responding to peaceful protests have led some politicians to question whether police really need this much money and firepower.