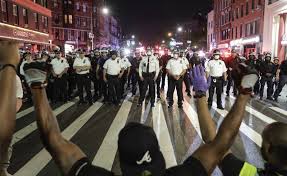 As protests continue with no end in sight, marchers returned to the streets for a ninth night of demonstrations on Wednesday for what were largely peaceful demonstrations, marred by a couple of examples of police violence. According to the AP, Wednesday marked the second night that protests were "subdued", following elevated charges against the officers involved in Floyd's killing, as well as a start-studded memorial service in Minneapolis that featured the Rev. Al Sharpton and many of George Floyd's family members.

According to the AP, the quieter mood was inspired by the new and upgraded criminal charges against the officers involved in Floyd's arrest, a more conciliatory approach by police (in many areas, police marched with them); along with the realization that the burst of violence following Floyd's killing wasn't sustainable.

"Personally, I think you can't riot everyday for almost a week," said Costa Smith, 26, who was protesting in downtown Atlanta.

Still, protesters have shown no signs that the marches will stop any time soon. And with millions of unemployed Americans, we wouldn't be surprised to see the reaction to Floyd's killings become an entrenched movement that continues for months, like Occupy Wall Street.

On protester in NYC told an AP reporter that there are "a lot more nights to go" of marching because protesters hadn't got what they wanted." Floyd's brother Terrence appeared in Brooklyn, energizing the marchers. AP reported Friday morning that the NYPD made 240 arrests Thursday, compared with 180 on Wednesday.