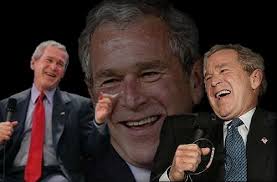 In a statement released on Tuesday, Bush announced that he was "anguished" by the "brutal suffocation" of George Floyd and declared that "lasting peace in our communities requires truly equal justice. The rule of law ultimately depends on the fairness and legitimacy of the legal system. And achieving justice for all is the duty of all."

Bush's declaration was greeted with thunderous applause by the usual suspects who portray him as the virtuous Republican in contrast to Trump. While the media portrays Bush's pious piffle as a visionary triumph of principle, Americans need to vividly recall the lies and atrocities that permeated his eight years as president.

In an October 2017 speech in a "national forum on liberty" at the George W. Bush Institute in New York City, Bush bemoaned that "Our politics seems more vulnerable to conspiracy theories and outright fabrication." Coming from Bush, this had as much credibility as former president Bill Clinton bewailing the decline of chastity.

Most media coverage of Bush nowadays either ignores the falsehoods he used to take America to war in Iraq or portrays him as a good man who received incorrect information. But Bush was lying from the get-go on Iraq and was determined to drag the nation into another Middle East war. From January 2003 onwards, Bush constantly portrayed the US as an innocent victim of Saddam Hussein's imminent aggression and repeatedly claimed that war was being "forced upon us." That was never the case. As the Center for Public Integrity reported, Bush made "232 false statements about weapons of mass destruction in Iraq and another 28 false statements about Iraq's links to Al Qaeda." As the lies by which he sold the Iraq War unraveled, Bush resorted to vilifying critics as traitors in a 2006 speech to the Veterans of Foreign Wars.

Bush's lies led to the killing of more than four thousand American troops and hundreds of thousands of Iraqi civilians. But since those folks are dead and gone anyhow, the media instead lauds Bush's selection to be in a Kennedy Center art show displaying his borderline primitive oil paintings.

In February 2018, Bush was paid lavishly to give a prodemocracy speech in the United Arab Emirates, ruled by a notorious Arab dictatorship. He proclaimed: "Our democracy is only as good as people trust the results." He openly fretted about Russian "meddling" in the 2016 US election.

But when he was president, Bush acted as if the United States were entitled to intervene in any foreign election he pleased. He boasted in 2005 that his administration had budgeted almost $5 billion "for programs to support democratic change around the world," much of which was spent on tampering with foreign vote totals. When Iraq held elections in 2005, Bush approved a massive covert aid program for pro-American Iraqi parties. The Bush administration spent over $65 million to boost their favored candidate in the 2004 Ukraine election. Yet, with boundless hypocrisy, Bush proclaimed that "any (Ukrainian) election…ought to be free from any foreign influence." US government-financed organizations helped spur coups in Venezuela in 2002 and Haiti in 2004. Both of those nations, along with Ukraine, remain political train wrecks.