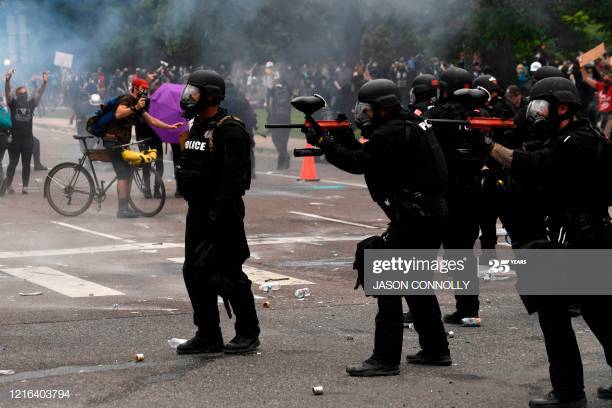 On the evening of June 1, President Trump and a cadre of administration officials walked from the White House to nearby St. John's Church in Washington, D.C. for a photo op. Trump stood in front of the church and with his right hand, held a bible aloft and posed for photos for about 50 seconds.

The effect of pepper balls on the senses lasts at least 24 times longer. Peaceful protesters in adjacent Lafayette Square could tell you this firsthand, because the U.S. Parks Police forcibly cleared the group, which it called "violent," from the park and from Trump's expected route using the chemical irritants.

Eyewitness accounts and reporting from the scene both indicated that the U.S. Parks Police used tear gas to clear the area. However, other agencies involved in the event, including the Secret Service and D.C. National Guard, declined to say what munitions were used. The Parks Police and the Trump reelection campaign both claim it used smoke canisters and something called "pepper balls," which are ultimately just a type of tear gas.

WHAT ARE PEPPER BALLS?

Pepper balls are very similar to paintballs, but they are filled with an oily organic resin called oleoresin capsicum (or OC), which is derived from peppers. It's the same irritant used in pepper spray, and comes in powder or liquid form. There's also a synthetic version, PAVA.