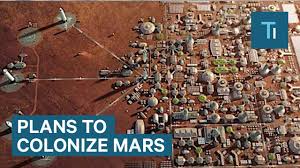 On Friday, CEO Elon Musk confirmed via Twitter that he's still aiming to launch the first ships to Mars by 2022. These ships will hold cargo designed to support a future manned mission. That mission will come in 2024, the next time when the Earth and Mars are close again.

Musk first outlined this target in a September 2017 presentation, where he described the BFR vehicle that would support this mission. At the time, Musk said the 2022 figure was "not a typo … although it is aspirational." A lot has changed since then – BFR became Starship, a mini-Starship flew, several prototypes exploded – but it seems Musk's determination to reach the red planet in super-fast time has not wavered.

An artist's impression of the Mars city.SpaceX

Why the rush? Musk explained via Twitter Thursday that he sees it as a race against time. Twitter user "PPathole" wrote that within another half a billion years the oceans will evaporate as the sun expands, meaning humanity has a short window to expand out and resettle. Musk responded to this:

"That's when all life on Earth will be boiled off. What matters is how long civilization is capable of making the jump to Mars. This could be a very short period of time measured in decades. It took 4.5 billion years to get to this point & civilization isn't looking super stable."