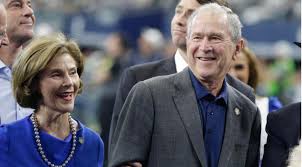 The Chimp – George W.Bush – the creature who marinated America in fear about Trrr for eight insufferable years, manufactured a war that killed hundreds of thousands, ordered the baldfaced torture of Americans, the mass warrantless and probable cause-free surveillance of Americans and the crotch fondling of Americans at airports emerges to lecture Americans about "the injustice and fear suffocate our country."

What's next? Ted Bundy working at a women's shelter? Oh. Right. Ted Bundy actually did that.

Maybe dress up like a clown and do kid's parties? Before putting kids under the crawl space? 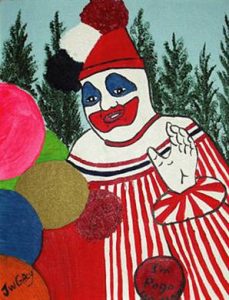 Not for lack of trying.

And he may eventually succeed – by having set the precedent for a resurgent Stalinism, masquerading (literally) as virtue signaling. The Fear Mask is the new armband. The marker of the helpers of the next Stalin, whomever he or she may be.

This loathsome little man – a frog torturing sadist who enjoys other people's pain, smirks at their suffering – has the balls to speak of fear and injustice?

He ought to be afraid to show his face in public.