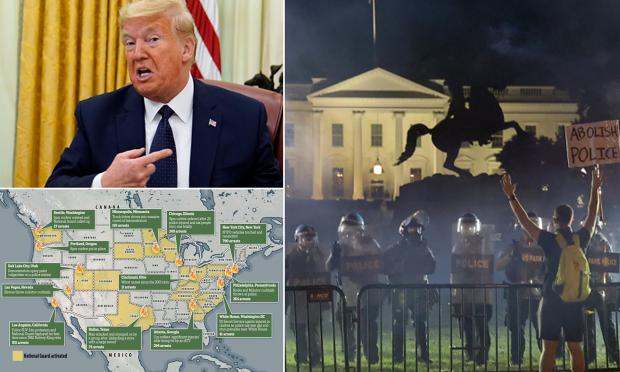 (Natural News) State governors are being "too soft" and "weak" on the rioters and protesters who are staging massive demonstrations across the country, President Donald Trump said during a call with government officials.

"You have to dominate if you don't dominate you're wasting your time. They're going to run over you, you're going to look like a bunch of jerks," Trump said as he lashed out at the governors, as per the audio obtained by the press.

"It's a movement. If you don't put it down, it will get worse and worse," Trump said as he berated the officials, adding that the "movement" ?– which he has linked to the Democrats, the far Left, mainstream media and the anarchist organization Antifa ?– will be successful if the governors don't put their feet down on the problem.

"The only time it's successful is when you're weak and most of you are weak," Trump said.

According to the president, a good move for the governors – whom he said were looking like "fools" in the face of the ongoing riots and violence ?– would be to call up and deploy the National Guard, which he credited with successfully de-escalating the situation in Minneapolis.

"You've got a big National Guard out there that's ready to come in and fight like hell. I tell ya, the best, what they did in Minneapolis was incredible," Trump said, adding that Minneapolis' decision to bring in the National Guard was "a beautiful thing to watch."

In addition to calling on the National Guard, Trump has also suggested mass incarcerations to solve the ongoing crisis.

"You have to arrest people. And you have to try people and they have to go to jail for long periods of time," stated Trump, in reference to the protesters and looters who participated in the riots.

"You have to put them in jail for 10 years, then you'll never see this stuff again," he said during the call.

Washington: Governors must "control the streets"

According to Trump, the protests and riots ?– most of which were started as a response to the death of George Floyd, an unarmed black man who was killed by a white police officer ?– are "eroding" the United States' image to the rest of the world, and that the riots are making the country's officials look like "pushovers."

Attorney General Bill Barr, who also participated in the call, told the governors that they have to enforce measures not just to "control the streets" but also to get the primary instigators of the riots. (Related: Multiple cities declare curfews as Antifa riots continue.)