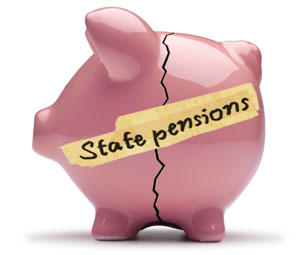 At a moment a number of US public pension plans have barely recovered - if at all from the 2008 financial crisis - now to be hit with continuing economic fallout from the corona-crisis and domino effect of historic unemployment, an alarming report in FT warns that seven major public pension plans are due to deplete their assets by 2028.

"The correction in the US stock market has increased the long-term structural problems across the entire US public pension system, particularly for the weakest funds," FT observes.

A new, detailed study attempting to forecast the near term struggles of public pensions at the Center for Retirement Research at Boston College found: "Public plans with extremely low funded ratios in 2020 may face the risk of running out of assets in the foreseeable future if markets are slow to recover," according to researcher Jean-Pierre Aubry.

The depletion would impact many hundreds of thousands of Americans and their retirement, assuming a potential slow recovery for the US stock market.

FT summarizes the Center for Retirement Research's analysis according to the following study highlights:

Over 320,000 members of the New Jersey Teachers and Chicago Municipal public pension plans: "A slow recovery for the US stock market could result in Chicago Municipal's funded position falling from 21 per cent this year to just 3.6 per cent by 2025. This would leave assets to cover just three months of the fund's retirement payments..."

Police and fire departments: "public pension plans of Kentucky and Providence along with Dallas Police and Fire, Charleston Fire and Chicago Police could all end up with less than three years of retirement benefit payments saved as assets."