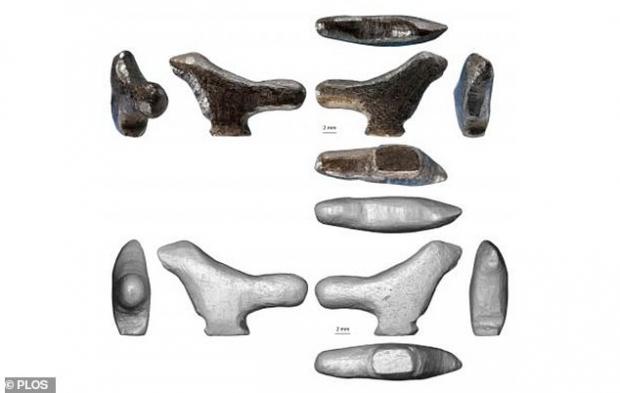 A tiny 13,300-year-old bone carving of bird unearthed at a rubbish tip has been hailed as 'China's oldest work of art' by an international team of scientists.

The small bird carving, recovered from Lingjing, in Henan, China, is the oldest instance of East Asian three-dimensional art ever discovered.

The 'exceptionally preserved' statuette, made of bone blackened by heating, is also the only known Palaeolithic sculpture representing an animal standing on a pedestal.

Researchers believe it dates to around 13,000 years ago, which pushes back the origins of animal sculpture in East Asia by more than 8,500 years.

'This discovery identifies an original artistic tradition and pushes back by more than 8,500 years the representation of birds in Chinese art,' said Professor Zhanyang Li from Shandong University in China, who led the study.

'The figurine differs technologically and stylistically from other specimens found in Western Europe and Siberia, and it could be the missing link tracing the origin of Chinese statuary back to the Palaeolithic period.'

European animal and human mammoth ivory carvings dated to 40,000 to 38,000 years ago are our earliest examples of prehistoric humans creating art in 3D form.