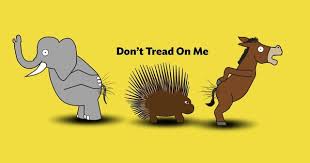 A reader asks about "voting Libertarian" – and my thoughts about Libertarianism as a political movement:

In reading your articles, it's clear you advocate libertarian principles, but I'm curious what you think of the Libertarian Party as an organization? Especially during the "Corona crisis," it's become increasingly clear to me that Democratic or Republican, the "lesser of two evils" is well, still an evil.  However, I also believe just voting Libertarian (or any "third party") as a "protest candidate" every four years isn't going to do much good; the only way to make any headway through the political system would be to support Libertarians (or independents who support the same basic principles) all the time and from the ground up — for city councils, county/township trustees, school boards, etc. (even running ourselves if we have the political acumen to do so) — in order build momentum and a national following. What is your thought on "voting Libertarian"?  Is this a viable method of political and social change, or should we try to "work with the system" and try to influence the major parties?

I support a Libertarian movement rather than a party. It's the ideas – and changing them – that will determine things more so than who gets elected. We suffer from too many (and tyrannical) laws and are under the thumb of those who impose them and enforce them largely because so many people want them. If a critical mass of people no longer wanted to be herded and micromanaged, they'd automatically be in favor of not herding and micromanaging others. The difficulty lies in making them conscious of this duality – and that is the job of a Libertarian movement.

But I am also a practical man and understand that it is sometimes necessary to accept the good rather than insist upon the perfect; that the perfect will likely never exist. Because humans are imperfect.

Still, we can try. And we ought never to give up.

Accordingly, I will support political movements that are favorably inclined toward more respect for the rights of the individual; the more articulate and consciously so the better. Republicans are terrible in this respect as they – generally – have no defined principles ("less government" means what, exactly?) and (worse) accept most if not all the principles of the supposed opposition. An obvious example being "repeal . . . and replace" Obamacare. No opposition to the idea of mandated/government-enforced health care. Just a "better plan" than the other side's.

How about leaving people free to "plan" (and decide) for themselves? What a concept!

2 Comments in Response to The Libertarian Party?

(Started above.) One of the basic problem places is the court system. Regarding EVERY trial, 4 things are REQUIRED: 1) an accuser; 2) an accused; 3) REAL injury proven to exist, and expressed "viva voce" from the stand by the accuser; 4) at least one witness (in addition to the accuser) + evidence. This is required by law in all cases, even if the parties all agree otherwise. Roughly 90% of cases that end with a judgment don't have all 4. That's the job of the Libertarian Party; to make sure that all cases have all 4; and to nullify all past judgments that didn't.