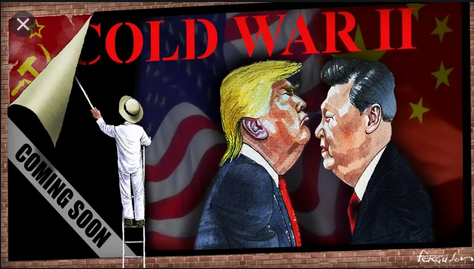 America's pundits and politicians have largely concluded that a new Cold War with China — a period of intense hostility and competition falling just short of armed combat — has started. "Rift Threatens U.S. Cold War Against China," as a New York Times headline put it on May 15th, citing recent clashes over trade, technology, and responsibility for the spread of Covid-19. Beijing's decision to subject Hong Kong to tough new security laws has only further heightened such tensions. President Trump promptly threatened to eliminate that city-state's special economic relationship with this country, while imposing new sanctions on Chinese leaders. Meanwhile, Democrats and Republicans in Congress are working together to devise tough anti-Chinese sanctions of their own.

For anyone who can remember the original Cold War, the latest developments may seem eerily familiar. They bring to mind what occurred soon after America's World War II collaboration with the Soviets collapsed in acrimony as the Russians became ever more heavy-handed in their treatment of Eastern Europe. In those days, distrust only grew, while Washington decided to launch a global drive to contain and defeat the USSR. We seem to be approaching such a situation today. Though China and the U.S. continue to maintain trade, scientific, and educational ties, the leaders of both countries are threatening to sever those links and undertake a wide range of hostile moves.

Admittedly, some of the steps being discussed in Washington to punish China for its perceived bad behavior will have little immediate impact on the lives of Americans. A lot of the threats, in fact, may turn out to be little more than good old-fashioned chest thumping. Consider, for instance, the proposal floated by the top-ranking majority and minority members of the Senate Armed Services Committee, Oklahoma Republican Jim Inhofe and Rhode Island Democrat Jack Reed, to fund a multibillion dollar "Pacific Deterrence Initiative" intended to bolster American forces in Asia. That effort, they avowed, will "send a strong signal to the Chinese Communist Party that the American people are committed to defending U.S. interests in the Indo-Pacific."

Well, that was easy! All we, the taxpaying citizens of the United States, need to do in this opening salvo of a new Cold War is salute Congress as it funnels yet more billions of dollars to the usual defense contractors and thereby "send a signal" to Beijing that we will "defend U.S. interests" somewhere far across the globe. (Now there's a moment to wave your American flag!)

But don't count on such a moment lasting long, not if a new Cold War starts in earnest. A quick look back at the original one should remind us that we'll all pay a price of some sort for intensifying hostility towards China (even if a hot war isn't the result). Perhaps, then, it's none too soon to consider how such a world would impact you and me.

For most Americans, the first consequence of an intensifying Cold War could be a weaker than expected recovery from the Covid-19 economic meltdown. Anything that stands in the way of a swift rebound — and a new Cold War with China falls into that very category — would be bad news.

Unlike in the original Cold War, when Washington and Moscow maintained few economic ties, the U.S. and Chinese economies remain intertwined, contributing to the net wealth of both countries and benefiting this country's export-oriented industries like agriculture and civilian aircraft production. Admittedly, such ties have also harmed blue-collar workers who have watched their jobs migrate across the Pacific and tech companies that have seen their intellectual property purloined by Chinese upstarts. Donald Trump stoked resentments over just such issues to get himself elected in 2016. Since then, he's sought to disentangle the two economies, claiming we would be better off on our own. (America first!) As part of this drive, he's already imposed stiff tariffs on Chinese imports and blocked Chinese firms from gaining access to American technology.

US War on Chinese Enterprises