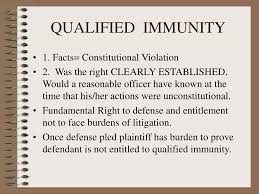 Qualified immunity has gone from a little-known issue to problem du jour—and for good reason. The legal doctrine allows public officials, including police officers, to violate your rights without fear of recourse, if those rights have not been spelled out somewhere by a preexisting court precedent.

Now this doctrine has drawn the ire of the Players Coalition, a group made up of current and former athletes and coaches from the National Football League, the National Basketball Association, and Major League Baseball. Members of the group have sent a letter to Congress this week urging lawmakers to support the Ending Qualified Immunity Act, a bill introduced by Rep. Justin Amash (L–Mich.).

"The Supreme Court has caused irreparable harm to public trust by creating and then expanding the doctrine of qualified immunity, which often exempts police officers and others from liability, even for shocking abuse," the letter reads. The 1,400 figures signing the letter include Tom Brady, Drew Brees, Steve Kerr, Odell Beckham Jr., and Greg Popovich.