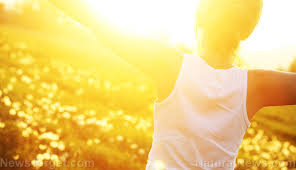 (Natural News) Cancer is one of the leading causes of death worldwide. As such, it is also one of the most widely studied human diseases by researchers.

Vitamin D is produced in the skin via the conversion of a direct cholesterol precursor called 7-dehydrocholesterol. This event is only triggered when the skin is exposed to UVB from the sun. Vitamin D can also be obtained from food sources, such as fatty fish, egg yolks, mushrooms and fortified food products. But because dietary options are limited, moderate sun exposure remains to be the best source of vitamin D.

Food-derived vitamin D is chemically inactive and needs to undergo two processes for activation. The first process occurs in the liver, where inert vitamin D is converted into 25-hydroxyvitamin D3, also known as calcidiol. As the most stable form of vitamin D, this metabolite is used as a biomarker for determining a person's vitamin D status.

From the liver, calcidiol is processed either by the kidneys, epithelial cells (i.e., cells that line the surface of organs) or immune cells to produce the physiologically active 1,25-dihydroxyvitamin D. Also called calcitriol, this active form of vitamin D acts as the high-affinity ligand — a molecule that binds to a specific protein — of the transcription factor, vitamin D receptor (VDR). Transcription factors are necessary for the conversion of DNA into RNA, which is the first step in protein synthesis.

Many types of cells contain VDRs in their cytoplasms. Vitamin D binding to a VDR enables the latter to modulate genes that encode for proteins necessary for the regulation of cell proliferation, differentiation and apoptosis (cell death). The vitamin D-VDR complex also influences signaling pathways that affect the functions of important enzymes and ion channels.

Over the past decades, research has uncovered new information about how cancer cells develop, proliferate, metastasize and even resist chemotherapeutic drugs. One of the most intriguing findings about cancer is the association between vitamin D — a hormone produced by the body in response to ultraviolet (UV)B rays — and cancer development. While excessive exposure to UVB is said to be the cause of most skin cancers, ironically, the hormone whose production it triggers appears to be the key to preventing cancer.

The authors reported: "Rapidly growing immune cells and cancer cells both use the same pathways and genes for controlling their proliferation, differentiation and apoptosis." Cancer cells, in particular, are notorious for their ability to proliferate uncontrollably, which allows them to form invasive tumors. (Related: Vitamin C vs. the Big C: Experts claim vitamin C has anti-cancer properties.)

This speech therapist taught her dog to speak - here's how you can, too