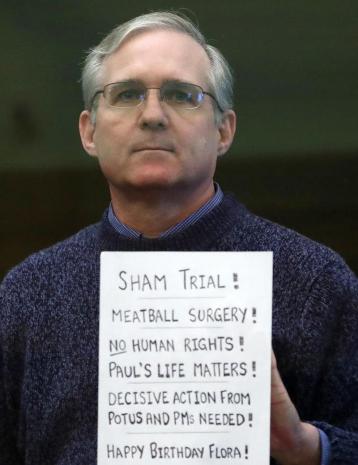 The verdict was read out loud in Moscow City Court as Whelan stood inside a defendants' cage holding a sign that read, "Sham Trial!"

Whelan holds several passports, including U.S., British, Canadian, and Irish ones, was detained in 2018 in Moscow on espionage, a charge that he denies.

We followed the story over the last several years, read:

American Arrested In Russia On Spy Charges, Faces Up To 20 Years Jail

The Curious Story Of An American Arrested By The Kremlin

Is Paul Whelan A Spy?

Days after his 2018 arrest, Russia's Federal Security Service (FSB) said Whelan was on a "spy mission" -- caught with a flash drive of highly sensitive data. He later pleaded not guilty to charges of espionage -- indicating that the flash drive was given to him by an acquaintance and had family photos.

Moscow said Whelan was ranked "at least a colonel" with U.S. spy agencies. After his arrest, BorgWarner claimed he worked for the automotive parts company, holding the position of director of global security.

After the guilty verdict, Whelan's defense said Monday they would appeal the decision within two weeks.

"Today #PaulWhelan returns to court to hear a verdict his case. If he is found guilty after this secret trial with no evidence, the world will see how the Russian judicial system mocks the very idea of justice," tweeted Rebecca Ross, spokesperson at the U.S. embassy in Moscow.