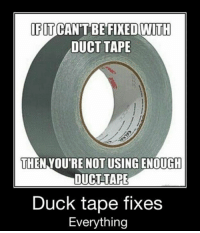 MacGyver (the original MacGyver and not the rebooted version) famously said, "If I had some duct tape, I could fix that." Never without his trusty Swiss army knife and duct tape, MacGyver saved the day in each episode. Whether he was using it to keep on a baby's diaper or to repair a hole in a hot-air balloon, he always found a way to use duct tape to solve both common and complex problems.

Don't mistakenly believe this was just a gimmick for the show. Duct tape has proven its worth over and over since it was invented during WWII...including being used by Apollo 13 astronauts to help devise air scrubbers to stay alive. Forbes has even named it a "must-have tool" and "the other greatest tool ever." The uses for duct tape today have expanded to the DIY movement, with individuals crafting everything from wallets to bags to complete prom outfits using only duct tape.

But don't let the duct tape's star power on MacGyver or its role in the DIY movement fool you. Duct tape can absolutely be a lifesaver in a crisis, which is why it's a must-have for your survival kit.

The history of duct tape

Scientists for Permacell, a division of the Johnson and Johnson Company, made duct tape in the 1940s to help soldiers keep their supplies dry. Since it was used to repel water, it was called "duck tape." Originally, it was army green to be camouflaged.

According to AZ Central, "Duct tape got its start during World War II when soldiers needed a better way to keep water from leaking into ammunition cases. Reportedly, the mother of two sailors came up with the idea of using a fabric tape that she had tested in the ammunition factory where she worked. […] The rest is history. Soldiers used the tape for everything from repairing Jeeps to firearms."

After the war, duct tape was used for the ducts in homes (this is one of the few things it is no longer used for today), and the color changed from green to gray, and the name changed from "duck tape" to duct tape.

25 ways to use duct tape in emergencies

Since it was first made, the combination of cloth-backed and waterproof adhesive tape has proven to be useful in a variety of ways and extremely helpful in emergencies. FEMA recommends duct tape and plastic sheeting to seal a room when you need to shelter in place in the event of a chemical or biological attack. Apply it around door frames and windows to create the seal.

Forbes reports, "[Duct tape] even cures warts. In 2002, doctors at the Madigan Army Medical Center in Tacoma, Washington treated a group of patients by having them apply small duct tape patches every day; the warts disappeared in 85% of those treated, making the therapy far more effective than freezing with liquid nitrogen, the standard treatment." 3. Close up wounds – even gunshot wounds

Duct tape can be used in first aid as a temporary bandage or suture. It can even be used to close up sucking chest wounds from gunshots.

Duct tape can keep a broken window from shattering.

You can wrap water pipes with towels and duct tape to keep them from freezing. If you have a shoe break or experience a shoe blowout, duct tape can keep the sole attached.

From patching rips and tears on couches to mending broken legs on chairs, duct tape can repair furniture.

Many people use duct tape to help them hang Christmas lights, but this same strategy can be used in survival situations.

While it may not be the most comfortable way to remove excess hair, duct tape can rip it off.

Clothing that is too big or too long can be temporarily hemmed using duct tape.