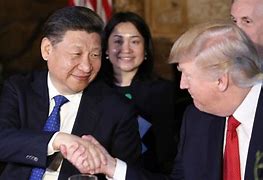 Interviews with nine current and former Chinese officials point to a shift in sentiment in favor of the sitting president, even though he has spent much of the past four years blaming Beijing for everything from U.S. trade imbalances to Covid-19. The chief reason? A belief that the benefit of the erosion of America's postwar alliance network would outweigh any damage to China from continued trade disputes and geopolitical instability.

While the officials shared concerns that U.S.-China tensions would rise regardless of who was in the White House, they broke largely into camps of those who emphasized geopolitical gains and those who were concerned about trade ties. Biden, the former vice president, was viewed as a traditional Democrat who would seek to shore up the U.S.'s tattered multilateral relationships and tamp down trade frictions.

"If Biden is elected, I think this could be more dangerous for China, because he will work with allies to target China, whereas Trump is destroying U.S. alliances," said Zhou Xiaoming, a former Chinese trade negotiator and former deputy representative in Geneva. Four current officials echoed that sentiment, saying many in the Chinese government believed a Trump victory could help Beijing by weakening what they saw as Washington's greatest asset for checking China's widening influence.

The general assumption underlying their views was that little could be done to halt the slide in relations between the world's two biggest economies. Thus, China needed to accelerate efforts to develop high-end indigenous industries, expand into developing markets and look for opportunities to work with nations in Europe and Asia to counter any U.S. isolation efforts.

Over the course of Trump's term, the realization has taken hold in Beijing that opposition to China enjoys deep bipartisan support in an otherwise-polarized Washington. The coronavirus outbreak, which was first discovered in the country's central city of Wuhan, has only hardened American views toward Beijing.

"I don't think the election will change the relationship in a fundamental way. The deep feeling in the U.S. is that the U.S. should contain China," Zhou said. "Whether Trump wins, or Joe goes to Washington, things will get worse."

Chinese officials, eager to avoid a repeat of their surprise when Trump upset former Secretary of State Hillary Clinton in 2016, have been pressing American contacts for insights about who will win. Senior members of the American business community in Beijing say recent weeks have seen a sudden up tick in outreach from well-connected Chinese friends who in some cases haven't contacted them for years.