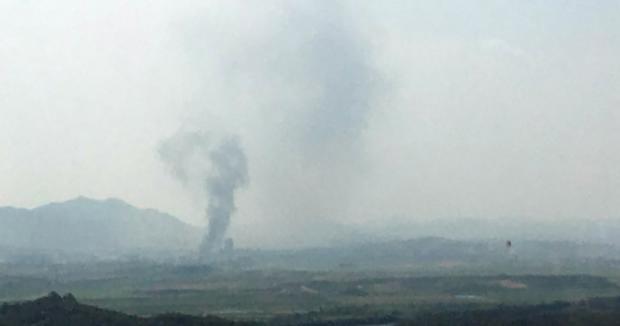 When Kim Jong Un's sister, Kim Yo Jong - rumored to be even more brutal and ruthless a leader than her brother - started making threats against the South and the US, while declaring that President Trump would "never again" be allowed to use the country to score political points, we suspected something was afoot.

Less than two weeks after abruptly cutting off all communication with the South (including an emergency cross-border hotline), North Korea has taken the extreme and unprecedented step of blowing up a liaison office set up along the heavily militarized border between the two countries (which are still technically at war).

According to media reports and black and white surveillance footage shared by South Korea, a loud explosion was heard and smoke could be seen rising into the air as North Korea blew up the inter-Korean liaison office in Kaesong - the de facto embassy between the two restive neighbors - in a dramatic escalation of tensions with South Korea near the the demilitarized zone.

North Korea blew up an office set up to foster better ties with South Korea in its border town of Kaesong on Tuesday after it threatened to take action if North Korean defectors went ahead with a campaign to send propaganda leaflets into the North.

North Korea's KCNA state news agency said the liaison office, which had been closed since January over fears of the novel coronavirus, was "tragically ruined with a terrific explosion."

Black-and-white surveillance video released by South Korea's Ministry of Defence showed a large explosion that appeared to bring down the four-storey structure. The blast also appeared to cause a partial collapse of a neighbouring 15-storey high-rise that had served as a residential facility for South Korean officials who staffed the liaison office.