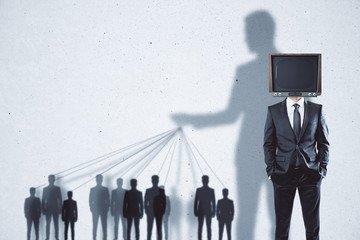 In this video, we look at the ideas of Edward Bernays, nephew of Sigmund Freud, and a pioneering mind behind the field of public relations and modern propaganda – particularly his ideas on how group psychology, and the illusion of choice, can be used to manipulate the masses.

This is all about dividing and conquering. While we argue about which political puppet is less evil than the other, they wreak havoc on us and destroy everything in their path for power, fame, and wealth.

If you want to make the best change, reject the system, the entire system, and refuse to vote. The task of any control system, therefore, is to maintain the facade of political choice and central to this is "the people's right to vote," writes Ben O'Hanlon for Medium.

The easiest way to divide people is through political theater. This is going to be a tough red pill for people to swallow…

It literally doesn't matter who you vote for. If your vote actually mattered, it would have already been made illegal.

"Let us control the money of a nation, and we care not who makes its laws."

– A "maxim" of the House of Rothschilds.