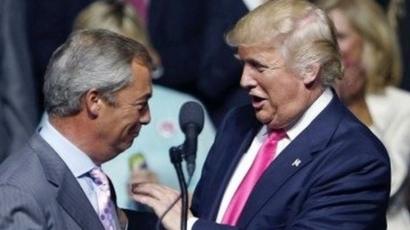 Mr Farage made the remarks to Alex Marlow on the Breitbart News Daily Show on Sirius XM Patriot on Monday, when he was asked about his recent break with Global Radio's LBC, where until last week he had a daily political talk show.

While Mr Farage declined to comment on the specifics of the change, a position of silence has has taken since the surprise announcement on Thursday, he did offer his thoughts on the broader move to suppress freedom of thought and speech in the United Kingdom, implying those developments may have had something to do with his ouster.

Making clear present developments were historic in scale, the Brexit leader told Marlow and the Breitbart News Daily audience that: "It seems that the real threat we face now is a genuine threat to free speech. I have never known a time when, in the United Kingdom — which is famed for its huge breadth of media commentary and views — I have never seen so many people so scared to write and say and speak and broadcast what they think. It really is very disturbing."

Mr Farage explained that while it was clear the simple and face-value idea that black lives matter was unarguable and widely supported, the organisation that calls itself Black Lives Matter hid a radical agenda behind its agreeable sounding name, but used the title to accuse anyone who dared disagree with its hard-left views of being racist. He continued: "the truth of it, of course, is that Black Lives Matters the organisation is open Marxist, Anarchic, wants to abolish our police forces, and is doing its best culturally to literally destroy and erase every piece of symbolism of our long and complex history.

"We're at a point where if you criticise 'Black Lives Matter' the accusation is you don't support equality and you think there should be a huge racial divide. And that is where we are. I am just not somebody who is prepared to go along with that, and I won't support mob rule."

On how the woke-left police the new orthodoxy of thought, Farage said "Fear is what dominating absolutely everything", pointing out political activists would vilify dissenters online, in the street, and agitate against businesses to deprive funding. On the organised campaigning networks that perpetrate this enforcement, Farage told Breitbart News that ordinary peoiple increasingly felt: "…the fear knowing that the Soros-funded organisations will go directly to the advertisers who advertise on radio shows and TV shows and in newspapers and all the rest of it. And this is very much the way in which the cancel-mob works. They try to put the advertisers under pressure.