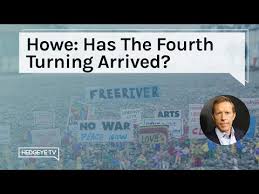 Neil Howe, demographer and co-authour of the book The Fourth Turning, briefly puts today's increasingly crisis-prone events into the context of his study of generational cycles ("turnings") in America which reveal predictable social trends that recur throughout history and invariably result in transformational crisis (a "fourth turning").

As PeakProsperity's Adam Taggart noted previously, 'Fourth Turnings' are characterized by a growing demand for social order, yet supply of it remains weak. The emergence of the surveillance state, a perpetual war machine, increased intervention in failing markets by the central planners, greater government control of critical systems like health care and the Internet — all of these are classic fourth turning signs of the desperation authorities exert as they lose control.

History shows time and time again that such overreach ends in rejection of the current order, usually via violent revolution.

And that is where Howe begins in the clip below, explaining that, despite stocks being back at or near record highs, "we're going to be in this [economic] hole for a long time… and that will have repurcussions on our political system… and ultimately the 'fourth turning' is a political process."

Noting a recent survey that showed 80% of Americans agreed with the statement that "America is out of control," Howe warns that "our system is at or near the breaking point."

…and eventually what you need is an end-run by an entirely new group, or new movement to take control and be energized by a young generation moving in… and I see that happening early in this decade."

Watch the full clip below:

Democide: Understanding the State's Monopoly on Violence and the Second Amendment