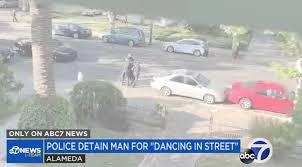 Here's another video showing what most of us are sick of seeing: A violent response to nonviolence.

A man was "dancing in the street" in Alemeda, CA. By the side of the street, actually.

According to locals interviewed by news media, the guy does this regularly and it's never been a problem. It's not a violent problem, at any rate. But the gang of Blue Thugs – armed government workers – reacted to it very violently. The Face-Diapered scrum manhandled and then tackled the man, holding him facedown on the street, as the video below shows:

What it was was the AGW's "training" on display. AGWs are "trained" in the manner of back alley pitbulls, to snap at anything in their orbit that they perceive as a "threat" – not to their "safety" but to their Authority.

An Aspect of the Con

Bretigne Shaffer Interviews Marc J. Victor - Why is the Attorney for Freedom so Optimistic?

Animals Notice Something Missing at the Zoo--People