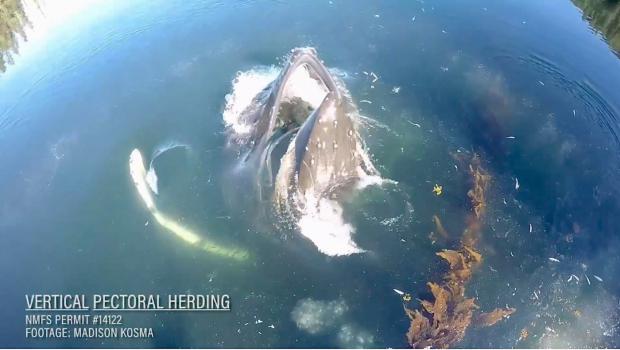 Humpback whales off the Pacific Northwest coast were documented performing never-before-filmed behavior—herding salmon directly into their gaping mouths with their fins.

This extraordinary feeding strategy, filmed by a drone, works in tandem with another advanced hunting strategy that involves encircling schools of fish in a morass or screen of bubbles – blocking the sight and sense of the fish within the circle.

It's not clear if this technique is used by humpback whales elsewhere, but demonstrates they are even more adaptable than previously thought.

RELATED: Dozens of Blue Whales Spotted in Antarctica For the First Time Since 1980s Whaling Ban

The majesty of whales has captivated sailors and scientists for centuries, and still today provide new moments of wonderment, as master fisheries student Madison Kosma explained in an article with National Geographic.

At Hidden Falls Hatchery along the eastern shore of the Baranof Island in Alaska, salmon babies are released into the ocean to help an overfished population recover. But, enterprising humpback whales have taken to arriving at just these moments to scoop up an easy lunch.

Kosma and the others on her research team used video drones to capture their feeding habits and, in doing so, finally filmed what Kosma said existed only as anecdotal evidence before, "corralling fish with their flippers".

"Thanks to the unique situation at the hatchery, and thanks to new technologies such as drones, we were actually able to document it," Kosa told Nat Geo, adding that her team had witnessed the so-called "pectoral herding" dozens of times in person.