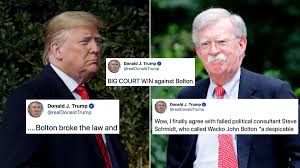 'The Room Where It Happened: A White House Memoir' will be sold and distributed to customers from June 23 as planned

Lamberth, a Reagan appointee, said 'the damage is done' after 200,000 copies have already been circulated around the US so a ban would be futile

The federal judge had heard arguments Friday over Zoom

On Tuesday, the Trump administration sued Bolton in order to postpone the book's release and it was leaked to the media the next day

It contains a number of damaging claims about Trump, including that he asked China for help with his re-election bid