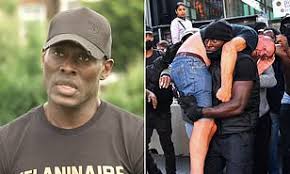 Patrick Hutchinson's face has been featured on news outlets around the world since he was photographed carrying the far-right demonstrator to safety during the protest near Waterloo Bridge this weekend.

Hutchinson says that it had been the first anti-racism gathering that he had attended since the movement gained worldwide traction following the death of George Floyd. Although the event was meant to be a peaceful protest for police reform, fights broke out in London after counter-protestors gathered in opposition to the rally.

"It was pretty hectic," Hutchinson told Bloomberg QuickTake in the interview below. "It was almost like a stampede. It was lots of people."

After Hutchinson and his friends joined the rally, he witnessed the white demonstrator fall to the ground following a violent altercation between the protestors and counter-protestors. Since the man was surrounded by people, he was unable to get up from a fetal position.

"His life was under threat," Hutchinson recalled. "I sort of just thought, 'well, if he stays here, he's not gonna make it.'"